TRINITY - The story behind the blog background photo 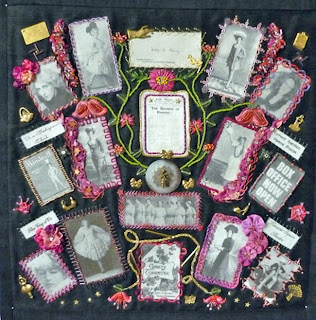 
The background photo selected for my blog is one that has significant meaning for me.  It is a piece of work that has been ongoing for a couple of years and was finally completed recently.  It is aptly named " Trinity" as it embraces three generations of women in my family whose roots were firmly entrenched in theatre, fibrearts and the fashion industry.  The three women?  My beautiful grandmother, the actress Miss Kitty Carey , my equally gorgeous mother, dancer Miss Joan Clarke and myself, the end product of the triad, Mis(s)-behaving (-:

I'm going to show some closer details of the stitching with explanations of the techniques along with a little history of the photographs themselves.  It probably goes without saying, but I will, that this piece is entirely hand stitched. It is quite dense in that it is only 14" square.  The background or base fabric for the piece is black dupioni silk, as is the finished border. The front is backed with fused flannel to give some stability to the heavy beading and embellishments. Once the stitching was completed then a dupioni back was added and finely quilted through all three layers. The back layer was cut larger so that when the quilting was completed, I could then fold over the edges to make a finishedborder on the front. 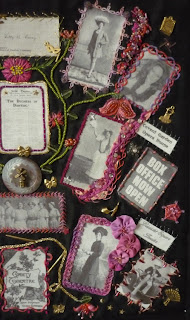 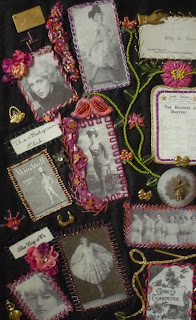 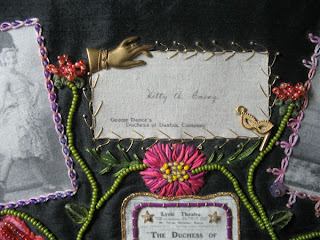 Gran's official calling card printed on to linen and embellished.
Below card - Silk ribbon flower of twisted layered stitches and
beaded stems with some moss stitched buds.
Frame to left -  edges are finished with simple chain stitches with bead
embellishment in centres. 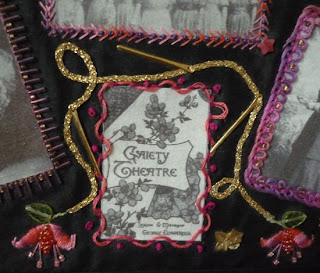 Photo transfer taken from original Gaiety Theatre program in our archives.  Gran worked this theatre first on the boards and later in the costume dept. Hence I have surrounded it with needles and thread - actual brass needles and Kreinik gold cord.  Little flowers are satin stitched and beaded - border of pic is laced and accentuated with french knots. 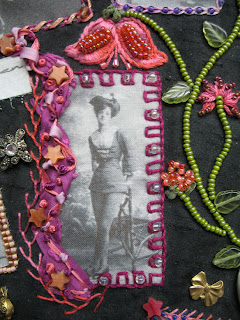 Daring and ahead of her time, Miss Kitty Carey, my Gran, in her Peter Pan costume circa 1905. The photo is edged in a closed blanket stitch and the left side is a build up of a meandering silk ribbon base with overlays of silk threads l looped through the ribbon with finer ribbon then looped through the  silk threads giving it dimension.  Overtop of that is feather                stitching, french & colonial knots topped with tiny glass stars. 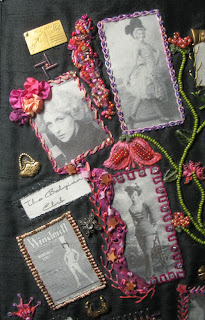 These are the only images of the three of us together as my Gran was killed in the blitz WW11 in London, England.  I never had the pleasure of her touch or had the joy of sharing our love of textiles and stitching together.  I was told by her sister, I have definitely inherited her genes, to the point I apparently even hold my needles and stitch in the same quirky manner that she did. However, I know for a fact that I do not have her  gift of genius in going up the high street with pad and pencil, sketching a dress in a posh shop window, coming home and making it up from scratch as she did for my Mum. In fact, my mother was so well dressed as a young woman, she was fondly referred to as The Duchess of Bedford Park by some of the lads in the neighbourhood. A title we have never let her live down!
The top right picture is of my mother at a very young age dressed in full regalia working at the Windmill Theatre in London.  The picture of myself to the left of her, is edged in wrapped and laced silk thread and fine ribbon.  Silk ribbon flowers finish off the top left corner. It was taken in my photographic studio.

The bottom picture to the right is of the George Dance Duchess of Dantzic company.  Gran is second from the left. The edging on this photo is wheat ear stitch,  needled with two strands of hand dyed threads and adorned with a bead in the centre of each loop. It gives a lovely feathery effect. Right above that is a wonderful antique carved bone button with a windmill charm stitched in the centre, representing the Windmill Theatre. The brass bows were added as both my mother and grandmother had a " thing" for bows. Alas, I do not. 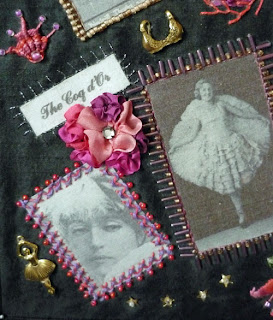 In the picture left, Joanie is wearing an exquisite ruffled silk dress made by my Gran.  I understand it was  very pale lilac in colour with a thin sliver of silver silk ribbon on the ruffle edges. Joan said it made the most beautiful gentle rustling sounds when she danced and she felt like a fairy queen in it. Her toe shoes were a deeper purple in colour. Her photo is edged with bugle beads alternated with # 8 seed beads.
To her left is myself during modelling days wearing a white feathered hat.  The photo is edged in herringbone stitch with a tiny bead in the heart of each outside crossover.  The Coq d'Or is one of the clubs where I worked, often with the loveable rascal of rock, Rompin' Ronnie Hawkins,  to pay for my photographic studies.

The next photo is of Miss Kitty Carey ( Gran) in her role of Catherine Upscher in the Duchess of Dantzic, a comic opera about Napoleon 1 and a laundress, who becomes a duchess by marriage. 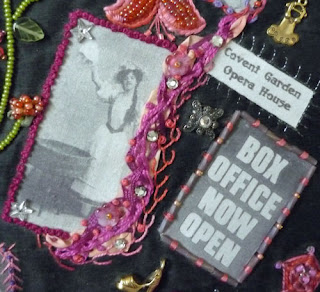 Again I have created a dimensional silk ribbon piece in the same vein as previously described
but enhanced with montee rhinestones.Around the rest of the photo edges, I made colonial knots in Rajmahal art silk threads which give a rose like effect. The border for the Box Office Square is larger bugle beads with a seed bead between each one and then a couched effect created by running a thick silk stitch over each bugle. 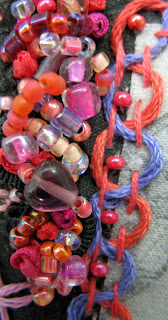 The picture to the right is a close up of the dimensional beaded pieces
at the top of the overall work. These are started with a  wandering layer of manipulated black dupioni tacked to the base fabric.  Then a random  layer of larger seed and bugle beads intermingled with bulky french and colonial knots in silk ribbon and ribbon floss are stitched on top of that. Layers are built up with loop stitches and bridges criss-crossing one another, adding or taking away more beads as you go depending on how jumbled you wish the layers to appear. Larger beads are wedged in between loops which assist in holding them upright.
To the right of the beaded layer is photo edging consisting of alternate coloured threads laced in opposite directions resulting in a rather circular effect and topped off with a seed bead within each circle.


To close things off, I give you the formal and elegant, Miss Kitty Carey, surrounded by silk pansies and soft loopy laced stitched edging. 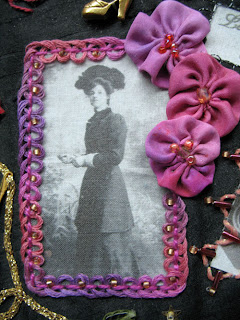 I hope you've enjoyed this little tour of " Trinity" and getting to know a little about the wonderful ladies who have influenced me and my stitching and textile endeavours over the years. I welcome any questions or comments regarding any of the techniques involved or about the creating of this piece of work.
Posted by Leonie at 22:05

Although textiles and beading are my main passions, this blog is open season on any intriguing subjects which pique my interest or imagination, and can stimulate your thought processes and creativity.

It is also my joy to support and promote other artists whose creations I use in my own work or whose work I admire.

To channel oneself totally into the stream of one art form or genre often narrows our outlook. Consequently, all that touches my creative process is drawn into this blog’s conversation: literature, philosophy, music, social justice, mythology, fashion, science, and a fervent love of ice hockey.

Leonie
Having been born into a theatrical family where needlework and costuming was a way of life, I was exposed at an early age to a love of the arts and the pressures and expectations of deadlines, last minute changes and the joys of free thinking and fantasy. Email me at l.hartleyhoover@gmail.com

This work by Léonie Hartley-Hoover is licensed under a Creative Commons Attribution-NonCommercial-NoDerivs 3.0 Unported License.
Permissions beyond the scope of this license may be available at Léonie's Email.

Past Posts (the Blog Archive)

A Few Blogs I Visit